Elixir of Love Cream Ale, brewed with lactose (milk sugar) and both apricot and peach purees, will be released on Friday, July 14, at 5 p.m., on draft only, at both our downtown and North Asheville locations.

“We hopped it with Azaca and Hallertau Blanc, which give it white grape and peach flavors, in addition to the fruit puree,” says Branden Mountain, Asheville Brewing lead brewer. “It’s a hybrid American-style cream ale.”

The Elixir of Love opera tells the story of a man in love with a woman who is out of league, so he purchases a love potion from a traveling doctor to aid him in his pursuit. Does the elixir work? Find out by seeing the opera and then trying an Elixir of Love yourself at Asheville Brewing Company!

This light style comes in a drinkable 4.8% ABV. Asheville Brewing will release a small amount of the beer on nitro as well. English-style cream ales typically are nitrogenated, so come out to try both the American and English versions of this traditional style.

Pairs well with salads and lighter fare, also, with a first date! 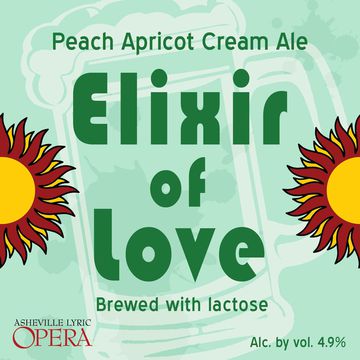